Boomerang, an experience in Greek nature!!

GAUTHIER ADRIEN-CAMUS – Barcelona
My Experience in Hopeland.
This was my first Erasmus project, so I came in not knowing what to expect really, and without too high expectations. But from the first night, after we discovered the place, Hopeland, I knew that I was going to enjoy it a lot. Then the next day, activities started, we got to all know each other and started creating bonds over games that brought me a lot of fun.

Throughout the project, we did some activities that for me didn’t really have a meaning, up until we started reflecting on them, and shared with everybody how we felt about what happened, so it was really important to talk between us and I would say that I learned the most from the other participants.

But there were some activities like the simulation day, where we got in the situation of real life and had to handle all the costs, ups and downs of life, that were really great teaching activities, I got to see what I was strong at, what could be idea for me to implement in real life in the labor market, and things like this.

And for me, it was also incredible that in such little time, a few days only, we got to create very special bond with people. Of course, some more than others, but living like this as a community, working together and sharing everything was something that I really looked forward to before coming, and enjoyed a lot, as I love being around people, and in Hopeland, you are never alone. The staff and particularly the trainers, were for me incredible people, they had a lot to teach. As it was the first time, I was experiencing this, I wouldn’t be able to compare it to anything else, but in general I was completely satisfied of what the team had to offer.

To conclude, it is clear that this was an amazing experience for me, I will never regret going there and would happily do it again, as there is much more for me to learn.

DANIEL CENTELLES SUTIL – Castello
Hopeland and the Boomerang project came as something I was not expecting, but the little voice in my head told me to take the opportunity and go for it. So, I paused my life for 15 days and went on an adventure to a magic place in the middle of Greek nature, surrounded by 41 more international and amazing vibes.

The topic of the exchange was employability, but when you join an Erasmus+ project, you learn more besides the main theme, you grow as a person, you make friends that last once the project is over and you get to feel better with yourself. During the ten days the project lasted, I met people I still keep in contact with. Some of them seemed like I knew them since forever, some of them gave me really useful tips or ideas that I’ve used afterwards in my daily life.

If you are still hesitating to join a project like this, I totally recommend you to go for it. We never know how much we can learn and how far we will get if we do not risk it!

PEDRO GIL GONZÁLEZ – Alicante
My experience in this youth exchange has been very positive. I have managed to connect with other cultures, meet different people and understand our diversity a little more.

Our stay in the beautiful Hopeland became an intercultural bubble in which we were free to express everything we felt. Thanks to the group, our coexistence was really easy since we had a very strong cohesion from the beginning.

In this field of work I also learned to value simple things like having hot water, drinking water and even a place to sleep. This takes a bit of getting used to at first, but when you realize that even though you don’t have these things in abundance, you still have them, you feel very lucky.

Having the opportunity to participate in the Boomerang project during October 20-30 has also helped me to connect what I really want for my professional future, they have been days of many new concepts and knowledge, but after a few days, it has helped me to see it more clearly.

I highly recommend this volunteering to anyone who wants to see the job market from another point of view.
Thanks.

IMPLEMENTATION OF A GAME CREATED DURING THE PROJECT
SPANISH/FRENCH GROUP

SPEAK UP! – Castello
The national team decided to implement this activity, where participants improve their public speech skills. This game was about making an introductory game to release the stress and the worry about speaking in public, and once participants feel safe in their environment, next stage would come.
During the speech activity, each participant had their own random non-sense quote, which they had to read for themselves. After that they had up to 90 seconds to persuade other and defend the given idea in the paper.

The outcome of the activity was very positive and players got a good experience from it, since they could see where the whole to be filled were regarding public presentation abilities.
This game was implemented by participants of the Youth Exchange Boomerang. The project was funded by Erasmus+. 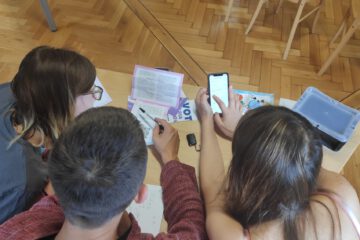 Training Course Breakout Box in the Czech Republic, read about the participants experience. 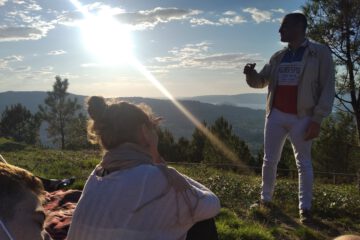 Last week I was participating on Erasmus+ training “Back to the Roots” in Pontevedra in Spain which was organised by “Ticket2Europe”. The topic of training was how to obtain and promote entrepreneurship in rural areas, Leer más…

Back to the Roots experience!!

This website uses cookies to improve your experience while you navigate through the website. Out of these, the cookies that are categorized as necessary are stored on your browser as they are essential for the working of basic functionalities of the website. We also use third-party cookies that help us analyze and understand how you use this website. These cookies will be stored in your browser only with your consent. You also have the option to opt-out of these cookies. But opting out of some of these cookies may affect your browsing experience.
Necessary Siempre activado
Necessary cookies are absolutely essential for the website to function properly. This category only includes cookies that ensures basic functionalities and security features of the website. These cookies do not store any personal information.
Non-necessary
Any cookies that may not be particularly necessary for the website to function and is used specifically to collect user personal data via analytics, ads, other embedded contents are termed as non-necessary cookies. It is mandatory to procure user consent prior to running these cookies on your website.
GUARDAR Y ACEPTAR